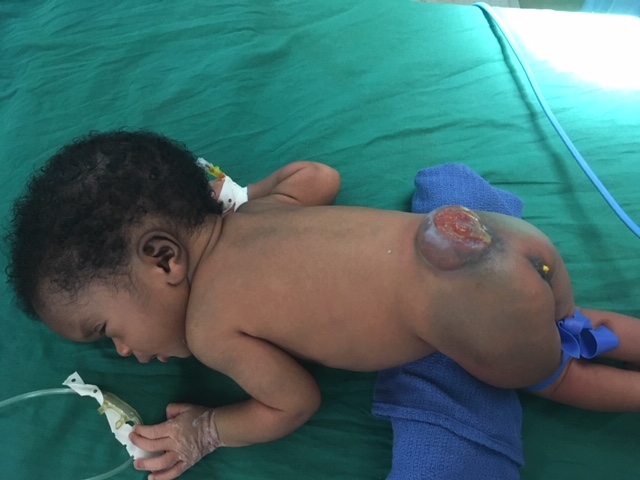 Baby with spina bifida and hydrocephalus

She was born at home on September 18th, but fortunate for baby Jawara that there was a good midwife, as she was born with spina bifida.

The same day of delivery the midwife took the family to City Garden Clinic (she was advised to come after she had done some inquiry where to take the baby).

The next day she was operated to close the spina bifida.

This operation was successful, but as often happens her head started to increase in size, a sign of hydrocephalus.

Unfortunately she got fever and signs of infection of the brain on the 6th day. The drain needed to be removed immediately.
With antibiotic she was treated until there was no more fever , but the head started to increase in size again.

So she underwent a third operation to place a new VP shunt again, but now on the other side. After the operation she got fever, but no signs of infection of the brain; she was found to have malaria. As soon as she started on the malaria medicine, the fever was gone. Now she is doing well.

It is time she received her name: Adama Erdi Jawara. Adama after her grandma and Erdi after the doctor that is treating her.