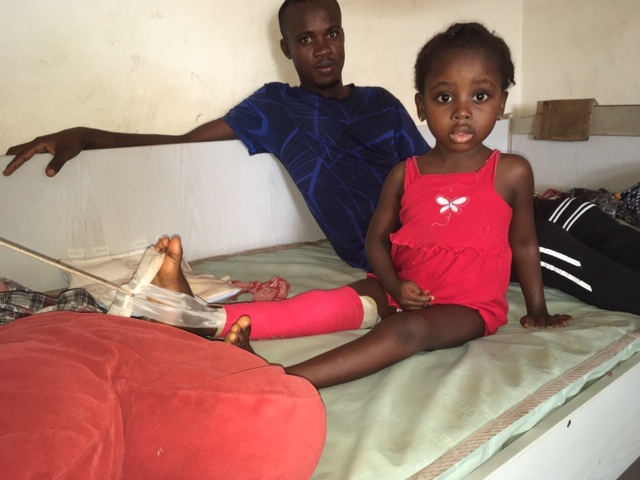 Zainab came on December 22th, she had had an accident with a motorbike. Her right upper leg was broken. She was brought by her father to City Garden Clinic. Clinically it was clear that her leg was broken.
This was explained to her relatives and also that the best way for her to get healed was to undergo traction in the hospital for several weeks.|}This advice brought some practical problem for the relatives, as who can stay in the hospital with the child for all these weeks, as her mother was about to sit exams. But finally they agreed to get treated as advised. To start treatment and also reduce pain, (skin)traction was applied.

Luckily for Zainab, the final conclusion was that she should stay in the hospital.

She accepted the traction very well and was very active despite the traction, which gave some challenge to the doctors and the nurse.

Her leg healed well and she was taken off tractions. An X-ray was made that showed a well healed femur fracture. After about a week of practicing she is able to walk well and go home.

Both the hospital staff as the family are very happy with the good results.